Wow! It sure is hard to keep such good news to ourselves for so long! Jacob and I are proud to announce that we are going to be parents in May 2016. 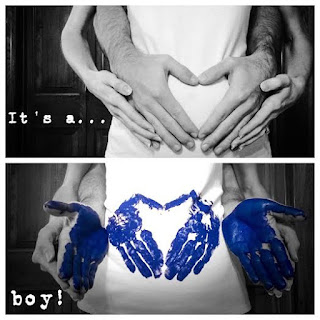 Okay, so now I can share all the things that I've been catching myself before posting or commenting on for the past 5+ months.

I thought for sure it would take us awhile to get pregnant for a number of reasons, but praise God it happened the first month! We found out pretty early on because I was supposed to have an MRI Arthrogram on my back/hip and wanted to make sure we weren't pregnant before having the MRI since it would not be good for the baby. I took a home pregnancy test about 5 days before my appointment, and it was negative. Then, I took another one about 2 days before...

...and there was a VERY faint line. My heart jumped! I kept the news to myself until I could get a blood test done at the doctor's office. Thankfully, there was a 10:00am time slot available that morning, so I made it in. The nurse told me she would call me by the end of the day with the results.

And the hours dragged on...

Around 4:00pm, I called to check in on the status of the test, and the nurse apologized, telling me the bloodwork actually had to be sent off for testing and that she would call me in the morning. Ah! I kept the news to myself that evening, though it was REALLY hard. I just wanted to make certain I knew for sure before telling Jacob (and cancelling the MRI).

And I screamed in her ear.

I was so excited! It was impossible to focus at work the rest of the day, and I could hardly wait until Jacob got home. I finalized my plan to tell him the good news and waited as the hours dragged on until 5:00pm. When he got home, I asked him about his day, and we chatted for a little while. Then, I pulled out my iPad and told him I wanted to show him a picture project I'd been working on (this is not surprising to those of you who know how much I enjoy taking pictures). One by one, I showed him each of the three pictures in the vertical collage below, filling the screen with only that picture:

He looked at me...then at the third picture...then at me...silence...followed by a slow smile. He said, "I need a minute to process." And then we went out to celebrate!

Research
After things settled in a little bit, I started my research. I am one of those girls that didn't do much wedding planning in my mind before I got engaged (or was even in a relationship) because I didn't want to be disappointed if it didn't happen. Well, same thing with babies. I've seen stuff just because you can't avoid it on Pinterest or Facebook, but I didn't have a long list of registry items prepared or really much of an idea of the stages of development in the womb, etc.

I downloaded two apps on my phone: What to Expect and Baby Bump. Each of them have unique features such as showing you the size of the baby along the way (from poppyseed to appleseed to pea to blueberry to raspberry to olive to prune to lime to plume to peach - and that's just through the first trimester), tracking your measurements, providing tips for nausea and other pregnancy symptoms, etc.

"Morning" Sickness
I felt pretty certain I wouldn't have morning sickness. I literally have not thrown up since second grade. No joke. Well...I still haven't thrown up, but there have been times when I wish I could! I would say more than anything I went through a time of aversion to most foods. (Oh, and "morning" is a misnomer - it's all the time!) If you know me very well, you know I eat a banana/almond/cinnamon smoothie and oats every night. That didn't happen for the first 17 weeks! The aversions went away (mostly) by week 14, but it took awhile to work back into my old favorites. While it was not the most pleasant time, the aversions were manageable, and my sweet husband went out to get me crackers and Sprite. He's so good to me.

Yes, let's not forget dear Jacob. He took over major cleaning for the first trimester (since I can't breathe in cleaning products), finished painting our rental house to go up on the market (since I can't breathe in paint fumes), went on long walks with me, catered to my sometimes interesting cravings (in the first trimester, it was Indian food, banana pudding, and sweet potato and sea salt Triscuits), and has basically just been the best husband ever. Cheers for Jacob!

Doctor's Appointments
We decided not to get the genetic testing done which would also tell us gender much earlier than the normal 20-week ultrasound. This meant that at our 10 week appointment, there might be two options:

1) My OB would use a Doppler to hear the baby's heartbeat, or
2) If the heartbeat did not register on the Doppler, we would get our first ultrasound.

Basically, insurance companies won't cover an ultrasound at 10 weeks unless you can't hear the heartbeat.

I went into the 10 week appointment with mixed feelings. I wanted to hear a heartbeat so I would know Baby B was okay for sure. But part of me wanted to not be able to hear the heartbeat so we could do the ultrasound. The OB brought in the Doppler and slid it around my abdomen for a few minutes, chatting and making light of the situation so I wouldn't be nervous. Then, she smiled kindly and said we had all the reason in the world to get the ultrasound. I was at a crossroads - both nervous and excited. What if something was wrong with Baby B and that is why we couldn't hear the heartbeat?

We had to wait about 10 minutes for the ultrasound tech to get ready. When she called us into the room, I laid down on the chair, and Jacob stood by the screen. The tech prepped me and kept talking while she rubbed the cool jelly on my abdomen and started roaming around.

THERE! I see Baby B! Oh my goodness - what a beautiful site! He/she was moving around, and we got to see the legs (those adorable, dangling legs) and lots of movement. In fact, at one moment, the tech was talking while we all watched, and then she became speechless: Baby B did a complete somersault in front of our eyes. How incredible!

"For You created my inmost being;
You knit me together in my mother's womb.
I praise You because I am fearfully and wonderfully made;
Your works are wonderful, I know that full well.
My frame was not hidden from You
when I was made in the secret place,
when I was woven together in the depths of the earth.
Your eyes saw my unformed body;
all the days ordained for me were written in Your book
before one of them came to be."

(Request: Due to the timing of the joyous news of our pregnancy, I was not able to get the MRI Arthrogram as scheduled. Please pray for healing from pain so that I can be the strong, courageous Mama I want to be for Baby B! Our plan right now is to continue with the official diagnosis after Baby B is born and pursue treatment.)

Posted by Allyson at 2:45 PM No comments: