And I’ve arrived! It was quite a trip. So…on the descent, I found my iPod buried in my backpack under the laptop charger. I’d had it with me all along. Oh, well! I got a solid 3 hours of sleep, which is actually pretty good for me on an overnight flight. When we started the descent into London Heathrow, I started to get a little more anxious about making the connecting flight to Edinburgh. With only an hour between landing and taking off (and knowing I’d have to clear customs and security at Heathrow), I made a point to ask the nearby flight attendant about my odds of making the second flight. Her first response? It would be tight in a normal flight situation, but we were facing an additional challenge: the London police were going to come on board to escort out an unruly passenger. Apparently, the guy had brought his own alcohol on board and had a bit too much to drink, creating a “situation.” All other passengers had to stay in their seats until he was taken care of. Eek! I knew I didn’t have time for that! The very second we got the green light, I booked it off that plane.

THEN, I had to figure out how the heck to get where I needed to go. Thank goodness for the helpful airport attendant who pointed me to the lift. I took the lift downstairs to the train, took the train to the correct terminal, got in line and waited to go through customs, only to be told I was in the wrong line! I scurried over to the correct line only to find the flight attendants on the first flight had neglected to hand out the claims cards. So I scrambled to find a pen and fill one out while I waited in the new, shorter line. When it was my turn, the girl at the counter (I say girl because she was definitely m y age) glared at me as she perused my card and asked for the address where I was staying. I had no idea! I mean, I have Lora’s address somewhere, but not anywhere accessible. The girl proceeded to chastise me for not knowing where I was going and required I provide a phone number (which, thankfully, I had written down on a pink notecard and stuck in my backpack).

After clearing customs, I rushed back upstairs thinking I was done, only to find I had to go through security again. Nightmare! Made it through and rushed back downstairs (up and down….) to the cattle yard…errr…waiting area…to look for a board that would tell me the gate for my flight. I found it and ran/waddled/bounced to the gate (which is hard to do when wheeling a small suitcase and wearing a backpack), arriving as practically the second to last person to board. Oh my! Whew!

The flight to Scotland was quick. I worked a little more on reading Catching Fire, and we arrived in Edinburgh in no time. Cool. Called Lora and Graham, and they were about 15 minutes away. I calmly went to the Baggage Reclaim to pick up my suitcase and stood in the herd to wait.


And wait. And wait…No bag.

As the single, last suitcase went ‘round and ‘round the turnstile, mine was nowhere to be found (as was the case for four or so other passengers who had been on the DFW-Heathrow flight). We went to the Baggage Facilities desk only to discover that our baggage did not make it on the flight we ourselves barely got on. It would arrive at 1:00pm in the afternoon. The attendant would need our addresses to have the luggage sent to the residences where we were staying. Not the address again!

Right about that time, Graham called and walked up behind me. Whew! He gave the required information, including his phone number because the attendant promised to text a notification at 1:00pm when the luggage arrived. Lora and I exchanged hugs and she officially introduced me to Graham. Ah, that familiar, soothing Scottish accent. He was born and raised on Glasgow, so he’s got the real thing. We decided to head out for lunch and hang around the city near the airport so we could stop by ourselves to pick up the luggage (apparently Graham’s been in this situation before only to have his luggage delivered at 1:00am). We went to a great little pub about 15 minutes away, right near the Fourth Bridge. Lora and Graham ordered the full Scottish breakfast, complete with haggis and black pudding (look it up :/). I ordered a Mediterranean vegetable sandwich with some kind of fantastic smoked cheddar. We ate a leisurely breakfast/lunch and then headed to the airport. We were skeptical because by 1:45pm no text had arrived, but we parked and started walking in. As we walked, Graham got the notification text. Yay! I exchanged currency, we picked up my suitcase, and we loaded into the car for the hour drive to Charles Steading (their house). 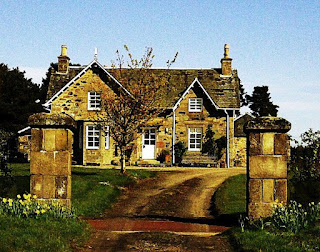 What a gorgeous drive! Green trees and meadows everywhere. Golden yellow rape seed flowers filled the fields. The countryside is simply lovely. As we neared their house, I got my first experience with their gates. You see, there is a railroad track that runs parallel to the house, and there are gates on either side of the tracks that have to be opened and shut for the car to cross the tracks. But first, you have to call the railroad station on the nearby phone to tell them you need time to cross. So, you ring them, tell them you need two minutes, and they say “Alright – you’ve got two minutes, love!” Then you open both gates, get back in the car, drive over the tracks, get out of the car, close both gates, get back in the car, and head on your way.

As we turned the corner to face the drive leading to the house, I was stunned. What a lovely house! The driveway is about a half mile, which allows plenty of time to take in the lovely house, steading, and plant life on the grounds. We parked next to the steading (their offices) and brought my things into the house. The room I’m staying in is absolutely delightful. There is a large oak dresser that stands from floor to ceiling. Two of the ceilings are slanted over a nice, tan leather couch. The bed is HUGE and tall, and I immediately notice a heated blanket – I’m going to be spoiled! When I peek into the bathroom, I notice the towel rack is heated, too. Talk about luxury (and necessity – it’s a bit chilly, you know).

Lora and Graham left me to get my bearings. I took to hanging my sweaters and unpacking a bit. Then I cleaned up and went downstairs. We visited in front of the fire and then decided to head out for dinner. They took me to this lovely little hotel restaurant called East Haugh Country House Hotel and Restaurant (by Pitlochry, Perthshire, PH16 5TE, Scotland). I ordered a delicious Grilled Fillet of Atlantic Salmon with Grilled Mushroom Cap, Graham got fish and chips, and Lora ordered her favorite scallops and a creamy risotto. We visited for a few hours over dinner, and I can tell any ice is broken – we’re all comfortable with each other now. I thanked them for dinner, and we headed back to the house. I missed most of that drive as I nodded off in the car. Now, back in my room, I’ve cleaned up, and I am ready to catch up on some sleep! It’s been a great day, and I’m looking forward to seeing all there is to see of St. Andrews tomorrow!
Cheerio!
Posted by Allyson at 6:33 PM