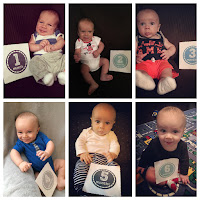 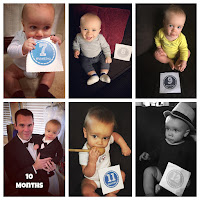 I never knew so much could happen in a year - so many emotions (LOVE, joy, sadness, elation, pain, gratitude, anxiety), so many experiences. I could never articulate it all, but I must find some way to preserve these memories. And so I write...

HE KNOWS ME. Looking into the eyes of my son and seeing recognition and love is one of the most beautiful experiences in all my life. There's a song by Audrey Assad called "Known" where she likens the way God knows us to the way a mother knows her baby's face. How comforting that God knows me so intimately...and I can only somewhat grasp it by the minutes and hours I've spent staring at my sweet James, taking in every inch of him.

RESEARCH. New parenthood can be such a battlefield of the mind. You want to believe you'll "know" your child and what is best for him or her. Then, when you doubt, you think it might be good to research, but you read conflicting things online. So you ask your pediatrician, but even their advice doesn't always seem right. PRAY.

COGNITIVE DEVELOPMENT. It is SO fun to teach James new skills. Once he reached about 9 months, he really started interacting with us and his environment so much more. He is a very thoughtful person, considering moves before he makes them (which makes this Mama very happy). He's already in the habit of furrowing his brow as he ponders what move to make next or tries to figure something out. Sometimes his lack of sleep can all be summed up in a clear mental leap (like when he learned to say "Ba, bah, bah" or stand up in his crib, etc.). He always loses sleep when he's gaining a new ability.

TIME. I had no idea that time could seem so different. On days of little sleep, time dragged on. When you've got a screaming baby in the car seat and miles to go, minutes seem like an eternity (and then there is the question of whether or not you want them to cry themselves to sleep or if that will just mean minutes of driving around aimlessly to aid a car nap). On the other hand, when you finally get your baby down for a nap, 45 minutes goes by in a SNAP! You learn to accomplish chores in half the time it used to take.

BABY-WEARING IS A LIFESAVER! At first, he didn't like it very much when he had to face me, but once his neck was strong enough, facing outwards was a win! We struggled with a lot of spit-up, and ultimately figured out the best thing to do was wear James in the baby carrier for 15-20 minutes after every feeding to minimize the milk loss. Initially, it was a daunting proposition - he was nursing 7-8 times a day! However, it quickly became routine, and James learned to really enjoy the carrier, and we still use it. Wearing James in the carrier is not only great for chores around the house but also for going on walks outside. He feels close to me and safe, yet he can move his legs around and have some mobility.

NAPS. James didn't nap on his own until he was about 5 months old. And there are still times he doesn't nap well. BUT, he takes at least one a day. They are so good for us both. Whether I nap or get things done around the house, it is such a great time to clear my mind, refresh, and gear up for the rest of the day. And I LOVE to pick him up from naps. If he's happy, I treasure the excitement in his eyes. If he is upset/sad, I soak up the snuggles.

CAR RIDES. Woah. I haven't yet experienced a forward-facing carseat, but I can tell you the backwards facing ones sometimes make it really hard to comfort a crying baby. Our car has become a treasure trove of toys. Here's the trick I've learned: Let him start with 2-3 toys and keep the rest up front with me. He inevitably drops or throws a toy on the ground, so I just keep cycling them back to him! When there is someone else in the car, it helps a lot. One person drives, the other person plays with James.

BREASTMILK IS LIKE GOLD. Whoever said "Don't cry over spilled milk" never spilled breastmilk. I didn't spill it...but I didn't get the freezer door shut on my stash of over 300 oz and lost every drop. It was devastating. I was probably as upset as I've ever been (except for maybe one other occasion). It felt like part of me died. I'd worked so hard to pump and save the milk for James. I had kept waking up in the middle of the night to pump when I could have been sleeping.After I calmed down some, I realized a few things: 1) God gave my body the ability to create the milk before, and He could do it again, 2) James was healthy and happy and growing, 3) I am not in control!


God is teaching me many things in life through becoming a mother. There is much else to say, but I will save it for another time.
There's that word again: "Time." It is short and long. Soak up and praise God through every special moment and pray through every challenging one.