This is the story of our firstborn son’s labor and delivery. We affectionately called him Baby B during the entire pregnancy.

At 39w2d, I had been experiencing contractions for two weeks. That’s right: two weeks! These were not the typical Braxton Hicks “practice” contractions but they also weren’t full-on, painful labor contractions. Over the phone, my OB’s nurse calmly (and perhaps with a little sarcasm) explained to me, the first-time mom, that the contractions fitting the infamous 5-1-1 bill (go to the hospital when your contractions are five minutes apart, lasting for one minute each, and have been occurring at that rate for one hour) would be painful.

Okay, let’s get some perspective on the word “pain.” As a former athlete who has shattered her left wrist in seven places, dislocated her shoulder twice, broken both feet and her elbow in one graceful fall...in Olive Garden...on a date (a story for another time), and is currently experiencing chronic pain that began a year and a half ago, I’ve got a pretty high pain tolerance. What if my pain threshold is different than the norm? What if I don’t know what they mean by “pain” and actually end up having Baby B at home because I don’t make it to the hospital in time?

When I went in for my 37-week appointment, the OB monitored my “contractions” and with a look of surprise came to me saying I really was having real contractions. Feeling somewhat justified, I waited for next steps...but the advice remained the same: wait until the contractions were painful. The alternative two signs of true labor would be bleeding or my water breaking.

I was disappointed, to say the least, and still worried I wouldn't be able to distinguish “painful” from not-painful contractions. So, I started fervently praying that my water would break so there would be no doubt when I needed to go to the hospital. It turns out only approximately 15% of women actually experience their bag of waters breaking on its own at the start of labor. For most, the doctor has to break the bag manually after labor begins (with either “painful” contractions or induction). It was a very specific prayer, but I prayed it regularly: at mealtime, before I went to bed, every hour in the middle of the night when I woke up to go to the bathroom because Baby B was apparently squeezing my bladder in utero, etc.

The OB also said that I was 90% effaced and 1 cm dilated (see here for definitions), so I felt like I was at a really good point and hoped to go into labor soon.

The last two weeks before Baby B arrived were the toughest. He was positioned well: head down, facing my spine, and deep in my pelvis. This last piece - being deep in my pelvis - led to heightened hip/back pain on top of my pre-existing pain and ultimately put me on crutches because I could no longer support my own weight on the left side of my body without excruciating pain. While it was ALL worth it, I simply could not wait to go into labor, and my prayers became even more intense.

When there was no visible progress made by my 38-week appointment, I was deeply discouraged. At this point, I was hardly able to hobble to the bathroom on the crutches and had my heart set on hearing the magic words “Go to the hospital - you’re in labor!” The OB had actually said on two occasions now that there was only a 50/50 chance I would even make it to see her at my next appointment but more likely at the hospital...in labor. I held it together while the doctor was in the room but fell apart when she stepped out. I SO wanted to meet our little guy but I also wanted him to come on his own, in his own time, as naturally as possible. More waiting lay ahead.

The night before my 39-week appointment, my prayer was answered in the wee hours of the morning. I was awakened by the ever-present, hourly need to use the restroom and grabbed my robe when I got out of bed. As I put on the robe, reached for my crutches, and hobbled my first step, the robe swished against my left leg...and felt wet. I took another step with the same result. Surprised, I finished the 10-step hobble to the bathroom and (without going into too much detail) discovered a very obvious clear fluid drip...my water had broken! Praise the Lord!

Below is a time-stamped outline of the events that transpired.

3:45am My water broke - hallelujah! Since we are currently living with my parents while trying to sell our house after moving back to TX, I woke up my mom to get some initial confirmation on my water breaking (since her water broke with my sister and me). We were both fairly confident that is what had happened. Excited, I woke Jacob up, called the after hours line at the OB’s office to confirm I should go to the hospital, and we got things together to leave.

4:30am We arrived at the hospital. In my excited but definitely still preggo-minded state, I confirmed the L&D floor with the security guard downstairs (who can remember little details like that at a time like this?), and we headed to the second floor. When we got to the L&D registration desk, I received some sympathy glances from the nurses since I was hobbling in on crutches, but I also got the “Awww, it’s a first time mom who thinks her water has broken” response when I provided my information. A nurse took me back to a triage room, handed me a gown, and told me to get changed while she gathered a few items.

Once I was changed, another nurse came in and explained that she was going to test my fluid to ensure my water had truly broken. She pulled out a piece of green litmus-type paper and explained that when it came in contact with the fluid, the paper would change to a bright blue if it was amniotic fluid (the result of a broken bag of waters) or would not change color if my water hadn’t broken. She barely touched the paper to the fluid, and it turned bright blue - confirmation! I was relieved that we were in it for the long haul, knowing we wouldn’t leave the hospital until Baby B was born. 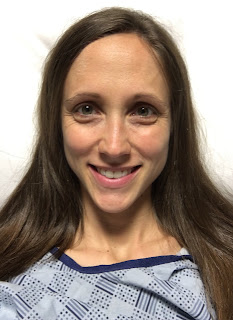 The next step was for the nurse to perform a cervical exam to confirm my current state of effacement and dilation. While trying to perform the exam, the nurse said she actually could not find my cervix… Which meant that she went to get another nurse to try.

Let's just say that having two cervical exams back to back is not fun.

Anyway, the second nurse was able to find it and determined that I was 1 to 2 cm dilated and 50% effaced. This was not what I had expected because my OB had been telling me I was 90% effaced for two weeks. However, I have learned that because cervical exams are a little bit opinion-based, the results can be different from person-to-person. The nurse did say that the baby’s head was so low she didn't know how I was able to walk. I felt a little bit more justified in using the crutches for the past two weeks!

(As Paul Harvey always said, stayed tuned for “the REST of the story…”)
Posted by Allyson at 3:53 PM