6:45am My first grape popsicle (YUM!). When in labor at a hospital, moma are not allowed to eat food or even drink water in order to avoid the risk of aspiration in the event that surgery is required. I paced myself on popsicles and ice chips throughout the day to "treat "myself and have something to look forward to. Who would've ever thought that popsicles and ice chips would be considered treats!?! When you aren't allowed to eat or drink anything else for 21 hours…

7:00am Shift change! My new L&D nurse named Christy came in and introduced herself. I liked her from the get-go, and she proved to be a calm voice of reason throughout the day.

At my 38-week appointment, I had been diagnosed as Group B Strep positive. This meant that it was very important for me to get antibiotics in my system prior to delivery. I received my first dose of Ampicillin at 7:00am and would receive additional doses every four hours.

7:05am I made my first trek to the bathroom. It was even more challenging to use the bathroom in the hospital because not only did I have the crutches, but I also had all of the cords and wires that I was hooked up to for monitoring.

When I returned from the restroom and the nurses tried to hook back up the monitors for the baby and my contractions, they had a difficult time finding Baby B's heartbeat and when they did, it was pretty low. Christy tried to seem matter-of-fact and calm, but I could tell the situation caused some concern. She said because of my movement, there was a chance that Baby B possibly moved onto and compressed the umbilical cord. She put me on oxygen and moved me around so Baby B would move too. His heart rate went back up, and Christy said this could happen several times during labor. As long as he responded, all would be well!

9:15am Christy came in and said she wanted to move me to a new room. I was technically still in a triage room, and she wanted to get me into a bigger L&D room. Once I got there, she asked me if I thought I could tolerate getting on my hands and knees on the bed for 20 min to help Baby B have room to move the umbilical cord if it was stuck around his neck. At that point, I wasn't really feeling much pain, so I tried it and ended up in that position for about 30 minutes. 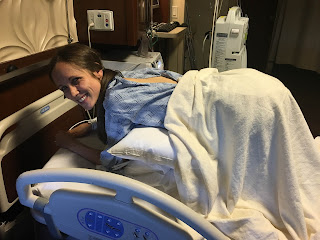 10:05am After making my second bathroom visit, it was time to sit on a birthing ball for awhile. A few months ago, I purchased a medicine grade exercise ball due to my pre-existing hip and back condition, and it served wonderfully as a birthing ball as well. I rocked back-and-forth, bounced lightly up-and-down, and did some circular hip movements. We finally started to see some labor progress.

11:15am <dun-dun-dun> Time for another cervical exam. This one was super painful for some reason, and I had a difficult time not crying. Christy told me that my cervix was pointing backwards, so she had to move around a lot to find it. When she finally did locate it, I was dilated to a 3. Seven and a half hours, and I was a 3...

11:35am Apparently, it was time to help things along a little bit. Christy explained that my OB wanted to start a Pitocin drip at 2 units to increase the regularity of contractions, which at this point were erratic and not very strong. Also, my OB requested the Group B Strep antibiotic (Ampicillin) be administered every 6 hrs instead of every 4 hrs, so the next dose would be at 1pm. The goal was to get two full doses in me prior to delivery.

12:30pm Still on the ball, I chatted with Jacob and saved (haha) popsicle number two: cherry. The Pitocin was increased to 4 units, which made the contractions much stronger and more frequent. My OB stopped by to check on me in person and said everything looked good. She did encourage me not to wait too long to request an epidural. I really wanted to wait it out until I was at least dilated to 4 cm because I didn't want the epidural to slow down the birthing process too much too soon. The contractions were definitely getting stronger but I thought I could handle it for a little longer…

1:15pm OK, OK. The contractions were really strong at this point. I looked over at Jacob between contractions and told him that I would not be able to handle the next contraction without crying. It was time to request the epidural.

2:00pm Oh. My. Gosh. The contractions hurt so bad! I definitely waited too long to request the epidural, and it was taking the anesthesiologist sooooo long to get there. Finally, she arrived to administer the epidural, and Christy turned off the Pitocin temporarily. I was in so much pain that I could not sit up and had to crawl onto the bed in the fetal position. The anesthesiologist said this position was not ideal for epidurals but that she would do her best (eek!). I was worried because I had heard of women having back issues after receiving a poorly administered epidural, and I wanted to be in the most optimal position possible, but I basically did not have a choice at this point because the contractions were so prolonged and intense. The difficulty of putting in the epidural caused some stress on Baby B, so additional monitoring was done before the Pitocin was restarted.

2:15pm Ahhh....relief. My body succumbed to the numbing agent, and I slowly relaxed. Christy had promised not to do another cervical exam (after the last painful one) until the epidural kicked in. The result: I was dilated to a 4, effaced 75-80%, Baby B’s head was at station -1, and the extreme pain was likely related to his movement down into my pelvis and some rotation during the process. Sitting on the birthing ball had indeed helped!

4:30pm With the Pitocin back on, we soon realized that it was causing me to have less than ideal contractions. At one point, I had a 3-4 min contraction (yes, you read that right) with no let up. This led to an immediate cascade of events that was truly alarming. Christy moved me to lay on my right side to see if we could get the contraction to stop, but Baby B’s heart rate dropped to ~60. I was moved as quickly as possible to the hands and knees position to hopefully relieve any pressure on the umbilical cord, followed by an unsuccessful attempt at an internal monitor. The room filled with additional nursing staff as well as an OR doctor. I was distraught and turned immediately to prayer for Baby B’s safety. Although I was barely aware of what was happening around me, I did hear the OR doctor and bits and pieces of a conversation about the level of tolerance for Baby B’s slowed heart rate and if/when we might need to head down to the OR for a caesarean. I had hoped to deliver vaginally but ultimately wanted whatever was best for our son.

The nursing staff administered Terbutaline to stop all contractions (NOTE: This drug made me super-shaky.) and stopped the Pitocin drip completely. Finally, we saw an increase in Baby B’s heart rate after a few minutes, and the level of activity in the room calmed down a notch. I proceeded to nap for hour or so, and the team monitored Baby B’s heart rate.

Time for some ice chips.