6:40pm Christy performed another cervical check, and I was finally dilated to 7cm. She was about to go off shift but called my OB to discuss the next course of action. The proposal was to restart the Pitocin at 1 unit and gradually increase while monitoring. When Christy left the room, Jacob and I discussed what we thought was best and agreed that we would try 1 unit but really wanted to hold out and not bump up to 2 units without ample monitoring of how my body responded. We were in no rush! We talked about the peace of God which transcends all understanding (Phil 4:7). It was so helpful to recall Scripture and remind ourselves that God was in control regardless of the circumstances. I was so thankful to Jacob for bringing that verse to mind, as it was important for me to step out of the chaos mentally and remind myself of the Truth.

7:00pm Christy introduced me to our new nurse, Liz, who would be with us through the night.

7:30pm Liz restarted my Pitocin drip at 1 unit, and the contractions started back. Baby B responded favorably (for awhile). 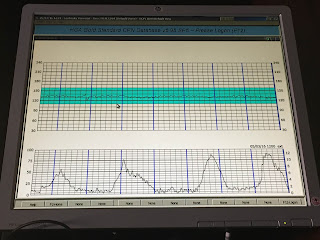 9:30pm The cervical exam proved that I was 100% effaced, ~9cm dilated, and +1 station. Since we knew Baby B could not tolerate me lying on my right side or getting up to sit on the ball, we moved me to a position that had me sitting up a little straighter (albeit still on my left side) in hopes of helping him move further down the birth canal on his own. Liz left to update the OB but told me to tell her when I started feeling the urge to push or really strong downward pressure (how was I supposed to feel the urge to push when my whole torso and upper legs were numb?!). The OB advised Liz to perform another cervical exam around 11:15-30 or when Baby B’s stats ramped up to show he was ready to make his entrance, so we waited some more. Another popsicle (grape) and more ice chips...

11:15pm Liz came in and performed another cervical exam when she saw Baby B’s heart rate drop noticeably, the timing between contractions get shorter, and the intensity of contractions increase. Finally, I was 10cm dilated(!).

Time to *practice* push. Okay, *practice* pushing = real pushing in my book. We used three contractions in a row to practice pushing with three pushes per contraction. With the first one, I seriously felt like I was doing nothing even though I was trying. In fact, I felt like I was trying to try, I looked at Liz for some kind of reassurance that SOMETHING was happening. She coached me through the three contractions, and we got Baby B’s head to crown. Then....Liz told me to stop while she called the OB.

STOP?! While he was right there ready to come out?! Wow…I don’t know that I will ever be able to articulate what that felt like!

11:48pm The OB arrived and prepared for delivery, checking the table of tools a nurse had set up. There were a bunch of tools I hoped she wouldn't have to use (forceps, vacuum, etc.), and then there were the scissors. We had discussed beforehand that Jacob would cut the cord, so she handed him the scissors - so cool!

And then, we waited. And waited. Annnndddd waited. We had to wait for another contraction, and of course it took forever.

12:00am It was time! I used this next contraction to start pushing, Four pushes, and our son James came out at 12:02am on 5/4/16, weighing 7 lbs. 8 oz. and measuring 19 1/2”. He was beautiful and perfect, covered in a thin layer of vernix and announcing himself with a cry that was music to my ears.

The rest of the events unfolded really fast. James was placed on my chest almost immediately after birth, and I was overcome with emotion. I was laughing and crying, and I just could not believe he was finally here! In my arms! 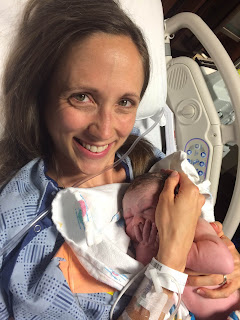 In the meantime, I had asked to see my placenta, so once it was delivered, the OB held it up for me. (I had to confirm with Jacob whether or not the doctor needed me to push another time, but he said she was able to just guide it out without any additional pushing.) What an incredible organ! Created specifically to provide nutrients for James. It was his lifeline! And it was HUGE! (Yes, we did get a picture, and no, I’m not going to post it out of respect for those of you with weak stomachs.)

The OB informed me that I had a second degree tear - completely normal and nothing to worry about. She stitched me up, and congratulated me on a smooth and quick delivery.

While I was being tended to, Jacob went over to the warming station with James for his Apgar test, footprinting, etc. James rocked a 9 on the Apgar!

Then, the nurse brought him back to me, and I tried nursing him for first time - what a foreign experience, and yet...it came naturally! I was able to get a little bit of colostrum in him before they wheeled him off to the nursery for a bit more cleaning up and testing.

Now it was time to get me unhooked from all the machines and take me down to the postpartum wing. Liz unhooked the catheter and epidural and asked me if I needed to use the restroom. I couldn’t tell, but she said I needed to try. She and Jacob led me to the toilet (with a measuring bowl in it - lovely) and turned on sink water to help. She said that if I didn’t use the restroom, I’d have to get another catheter (NOT what I wanted to hear). So, I determined that I would and took my precious time.

It took about 5 minutes, but I was able to go! When I stood up, I got really dizzy, so Liz tried to use my IV line to inject more fluids. Unfortunately, the line had rolled out of my vein, so the drip caused searing pain as it released into my arm. I cried out and she stopped the drip. Another nurse ran and brought back apple juice to help get me some electrolytes/sugar. I gulped the carton, got in the wheelchair, and we proceeded down the hall to the postpartum wing.

The next two days were full of joy and love, beeping monitors and feeding little James, pictures and lullabies, little sleep and taking care of my own recovery as well. But those are stories for another day!

Praise God for His gift of life and protection for little James! My heart is full. 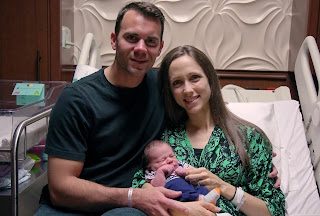